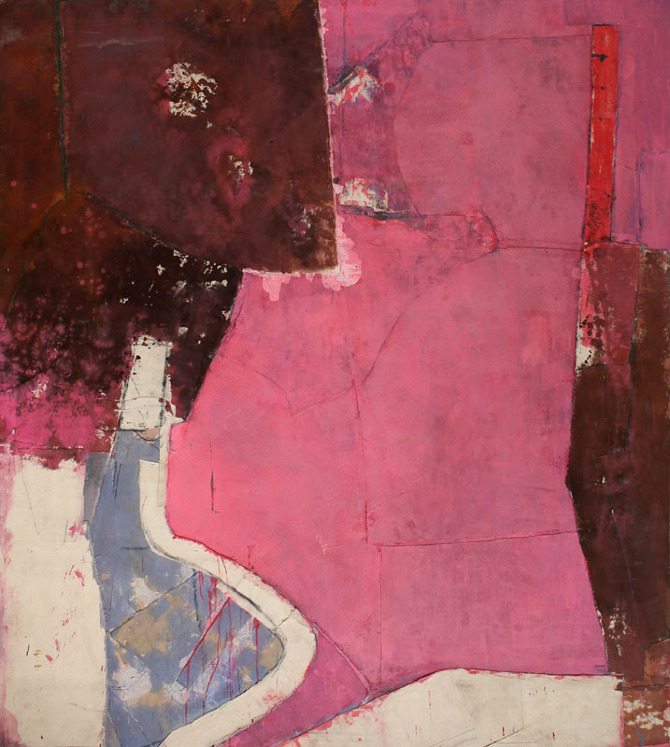 Send me more info on Untitled No 8203

Strips of canvas saturated in pink are shaped and curated into a large vertical passage in this bold painting. The hue, tone and personality of this dramatic rose colour framed by passages of red, white and mauve as well as the scale of the piece were inspired by Venetian frescoes -- perhaps Paolo Veronese's Apotheosis of Venice at the Palazzo Ducale or Giotto's biblical scenes at the Scrovegni chapel. This inspiration intersects with the expressive power of 20th century abstraction in this masterful acrylic collage on canvas. Created in 1982, this painting represents a dramatic chapter in Fox's career where his early work, inspired by European Intimism, gave way to large abstract canvases that explored the light-filled colours of Venice and the Mediterranean. John Fox (1927-2008) attended McGill University, the École des Beaux-arts de Montréal and the Montreal Museum of Fine Arts, School of Art and Design. In 1952, he studied at the Slade School of Art, University of London, followed by two years in Florence and Paris. A life-long resident of Montreal, Fox was an influential instructor at the Saidye Bronfman Centre and Concordia University. Fox’s artwork is held in many private, corporate and public collections including the Art Gallery of Greater Victoria, the MacKenzie Art Gallery, the Art Gallery of Hamilton, Museum London, the Montreal Museum of Fine Arts, the National Gallery of Canada, the Musée d’art contemporain de Montréal.