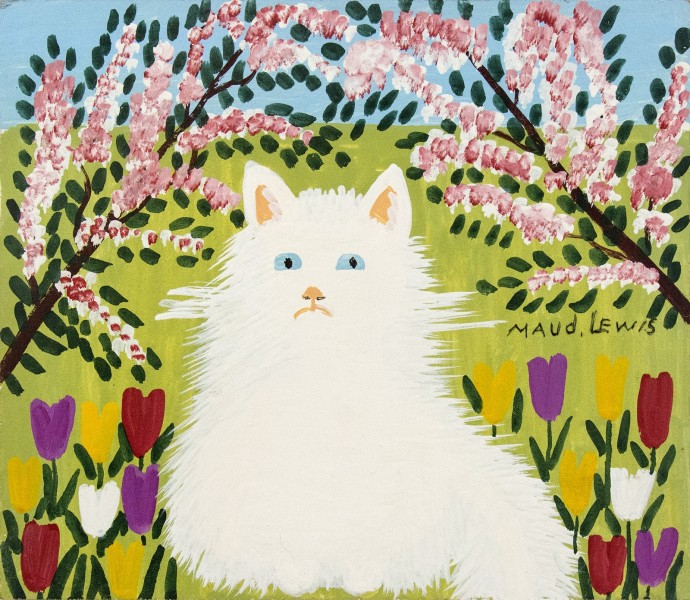 Lewis has depicted a frowning white cat with pink ears and blue eyes seated in a bed of red, mauve, white and yellow tulips on a lime green ground in this oil on panel. Two large flowering branches in pink and white frame the centrally placed cat below a clear light blue sky. This work is matted, framed and without glass. Referred to as folk art, Maud Lewis’s paintings are irrepressibly joyful and depict her surroundings with humor and affection. Created in bright, solid colors with a flattened picture plane and limited use of perspective, Lewis's paintings charm viewers with such subjects as winter landscapes with sleighs, deer in forest, oxen and her cats both wide eyed and frowning. Towards the end of her life, Lewis gained celebrity thanks to a 1965 CBC documentary and a feature in the Toronto Star newspaper. Most recently, a feature film based on her life, "Maudie", was released in the spring 2017. Starring Ethan Hawke and Sally Hawkins, the film captures the essence of Lewis's constrained life and the paintings that allowed her imagination to escape its confines. 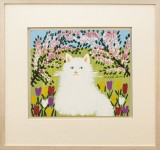 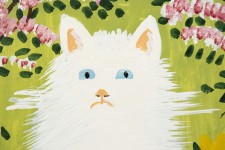 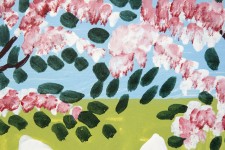 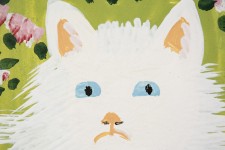