When success came ultimately and suddenly for artist Sylvain Louis-Seize (b. Montreal, 1968) in 2005, he left his construction job of 18 years and rode a wave that allowed him to paint full time. Exhibitions of his rich landscapes derived from an active imagination sold out to eager collectors. Then just as suddenly, in 2017, Louis-Seize put down his brush - painting having been as much a therapy for him as a livelihood, he sought a new direction in his artwork.

In 2019, after a 2 year hiatus, Louis-Seize returned to painting in a bold reinvention. His celebratory yet controlled abstract paintings merge a minimalist aesthetic with the brash language of street art. His works form a liberated narrative in which the rigorous tenets of historical minimalism no longer apply. Rather, Louis-Seize’s paintings align with those of the American artists KAWS or Shepard Fairey both of whom evolved from street art.

Louis-Seize's artwork including large scale commissions are held in private and corporate collections in the UK, the US, Canada, Asia and Europe. 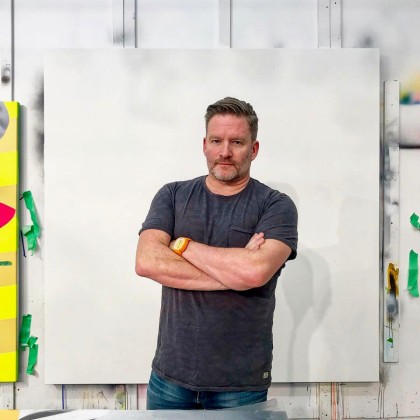