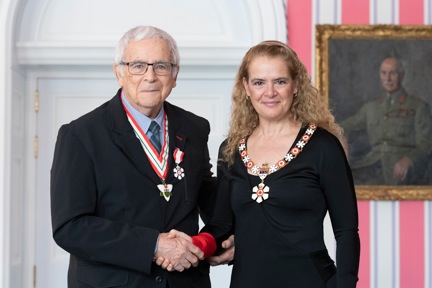 Burton Kramer has been named a Member of the Order of Canada. Pictured above are Kramer with Governor General Julie Payette during the ceremony.

The citation inducting the artist in part reads: "Burton Kramer is an icon of graphic design in Canada. With a career spanning over fifty years, his creations are visual emblems of the country's history and culture."

Kramer's clean, simple logo designs referred to as "wordless pictograms" such as that for Expo 67 earned the artist a reputation for modern, progressive thinking. After Expo, he founded Kramer Design Associates that created advertising for the Royal Ontario Museum, CIBC, Bell Canada and VIA Rail. Most famously, Kramer designed the logo for the Canadian Broadcasting corporation -- he took the letter C and repeated its shape in concentric waves, like radio signals.

For his fine art paintings and graphic design, Kramer has won many awards including an honorary Doctorate from OCAD University. In 2002, he was made a member of the Order of Ontario.