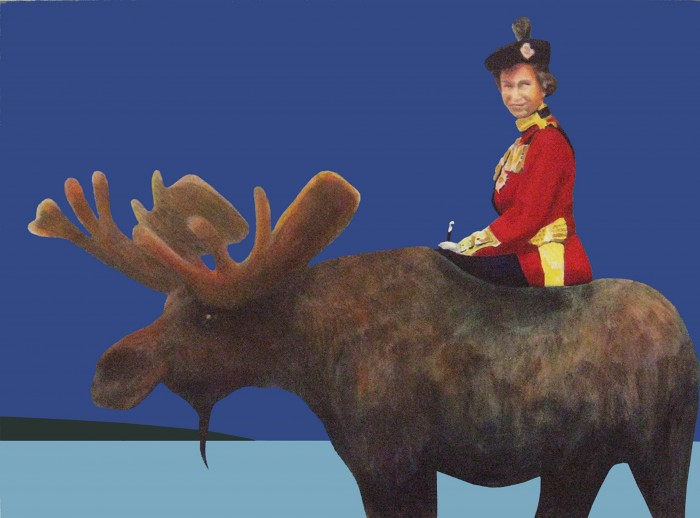 In a bold series of paintings produced over the last three decades, Pachter has examined and re-interpreted the late 18th century historical context of the politics of loyalism to Great Britain in North America and the new society it spawned.

This exhibition will feature some of Pachter’s best known paintings that explore and interpret the Loyalist Decade from 1783-1793, and will include portraits of Ontario’s first Lieutenant Governor John Graves Simcoe and his wife, the brilliant diarist Elizabeth Posthuma Gwillim Simcoe.

Later works will be chosen from his series on the War of 1812 and the First World War. The exhibition will also include Pachter’s renowned painting of the Queen riding a moose (Canada’s Monarch of the North), one of Canada’s most beloved contemporary pop art images. This will be his first solo exhibition in London.

Opening on August 18th, 2016 at the London Charterhouse and running until September 2nd, 2016 The Exhibition will be mounted in the Great Hall.

18:40 Lecture by John Fraser, OC, former Master of Massey College, and author of The Secret of the Crown: Canada’s Affair with Royalty (2012) on ‘A Tale of Two Sovereigns: The Queen of Canada and the Queen of England’.

19:30 Official opening of the Exhibition by the Honorable H. N. R. Jackman, OC OOnt CD, former Lieutenant Governor of Ontario, former Chancellor of the University of Toronto, and Visitor of Massey College. Response by Charles Pachter. Reception After the Exhibition closes at the Charterhouse, it will move to Lady Margaret Hall, Oxford University.

Posted 11 months ago by Zachary Shunock