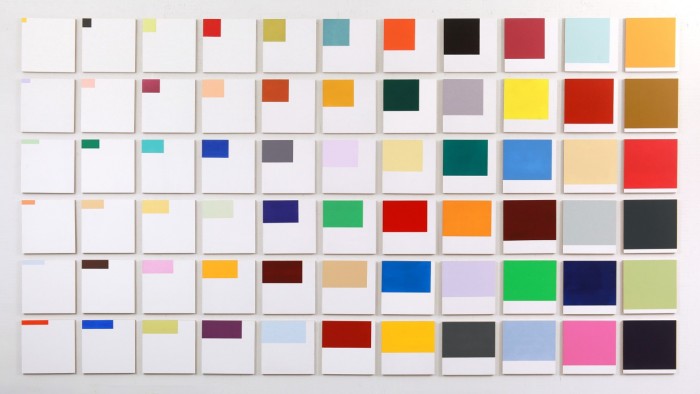 An exhibition of select paintings by Milly Ristvedt opens the new Franks Gallery inside the Agnes Etherington Art Centre, Queen’s University, Kingston. Between Chance and Order will be available for viewing between August 24 and December 1, 2019. A public reception will be held Thurs. Sept. 19 from 6 pm – 7:30 pm.

This show of recent paintings by Ristvedt will include the multiple panel installation titled Increments (2015).

In this work, 66 small square panels, each painted with a single orthogonal, are installed in a precise grid: six high and ten across. The panels are painted in flat, solid and specific colours with the area of each increasing incrementally from top down and left to right. Ristvedt described the work in 2017:

The multiple panel work, Increments, begins with the appearance of order and plays with the differences between change and progress, and order and chance. Internal forms follow two rules of change, from the upper left to the bottom right.

In contrast to these rules of change, the 66 colours were randomly chosen, mostly consisting of mixes from earlier paintings.

Incremental change sometimes appears as progress. Increments came about as a result of some less than optimistic musing on the task of effecting positive and meaningful (progressive) change.