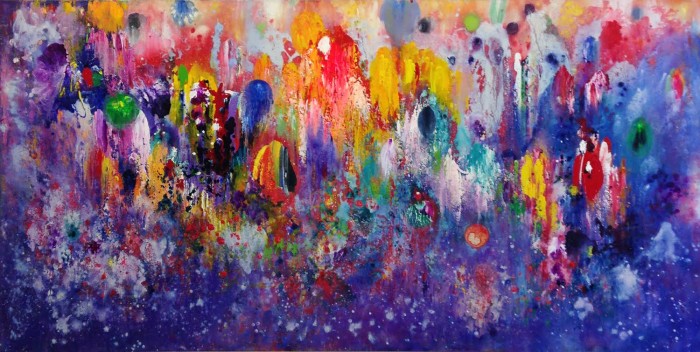 The Varley Art Gallery in Markham, ON, is hosting a solo exhibition of work by Paul Fournier, on until April 23, 2017. Fournier’s career spans more than 50 years, with his paintings and graphics exhibiting throughout Canada, the United States and Europe, as well as being included in many major public collections, including the National Gallery of Canada, the Art Gallery of Ontario, and the Tate Museum, as well as in private collections in the United States, South America and Europe.

The Varley describes the exhibition in the following terms:

“…Through expansive abstracted compositions, the artist uses painterly strokes and gestures as a means of expressing his personal observations of the natural world. These dramatic and colourful works reveal lush tropical greenery, underwater geological formations and distant celestial phenomena. Ultimately, they are a testament to Fournier’s decade-long experimentation of his medium and his ongoing quest to depict the poetic and spiritual dimensions of nature.”

Read more about the exhibition here.

Posted 2 years ago by Michelle Bunton