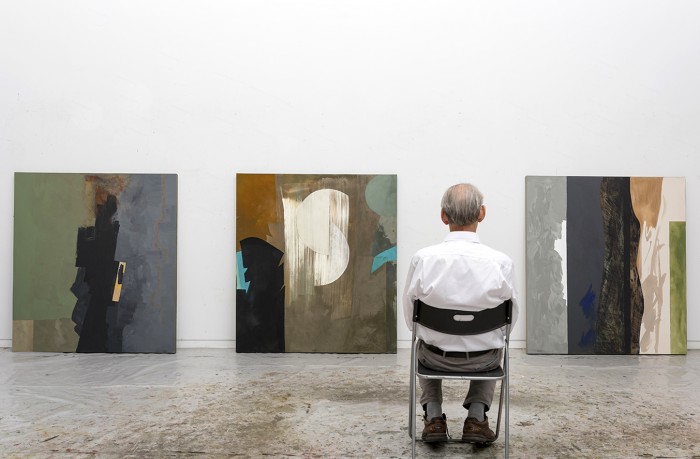 On the one year anniversary of the passing of Otto Donald Rogers, we remember this immensely talented Canadian painter and sculptor. Otto died on April 28, 2019 in Picton, Ontario, after a brief illness.

Listen to a recording from the U. of Saskatchewan honoring this greatly admired artist: http://drc.usask.ca/projects/jon/rogers.mp4

Born in 1935 to Victor and Mary Rogers, Otto grew up on a wheat farm near Kelfield, Saskatchewan. A precocious student, he completed high school and began teacher’s college in 1952 at the age of 17. That year he took an art class from Wynona Mulcaster who was so impressed with this young talent that she encouraged him to pursue a career in art. Otto moved to the US in 1954 to study at the U. of Wisconsin-Madison where he completed a degree in Art Education and a Master’s degree in Fine Art.

While completing his graduate studies, Otto met his partner of 60 years, Barbara Nelson who was also pursuing graduate studies. In 1959, Otto and Barbara moved to the prairies where he accepted a teaching position in the Faculty of Arts at the University of Saskatchewan, Saskatoon. He served as department head for several years.

In 1960, Otto embraced the Bahá'í Faith the teachings from which began increasingly to inform his artwork. In 1973, Terence Heath wrote in Arts Canada that Otto aimed for a loss of self-awareness and a complete immersion in the work, like prayer – an act of becoming one with an eternal order. And the closer the artist comes to this ideal, according to Otto, so too does his artwork. Perhaps this is what renowned New York art critic Clement Greenberg sensed on his visit to Saskatoon and Emma Lake.

“The only unmistakably ‘big attack’ painter I found in Saskatoon was Otto Donald Rogers…” Greenberg wrote in 1963.  Otto had successfully merged a narrative of modern art with the Bahá'í  Faith. This he filtered through a specific sensibility of Western Canada to create a unique vision in his paintings and sculpture.

In 1988, Otto retired from the U. of Saskatchewan and with Barbara moved to Haifa, Israel. For 10 years, as a Counselor Member he worked for the International Teaching Centre at the Bahá'í World Centre and traveled promoting the teachings of the Bahá'í  Faith.

While in Haifa he continued to produce inspired work, much of it on paper. At this time he was also the subject of a documentary Approach to a Sacred Place (1993). In this film, he describes the role of the artist and art:

Ideally, to be a good artist one almost has to be a saint and my definition of a saint is somebody whose spiritual qualities dominate their material. It’s impossible not to be material because we are material beings. You can’t wipe that out, not in this life. But those higher principles and that search for truth and excellence and hard work, all those old values… gradually your spiritual qualities start to dominate the material ones. … Art should uplift.

Otto and Barbara returned to Canada in 1998 settling into a peaceful waterfront home and studio in Prince Edward County, Ontario. They chose Ontario to be closer to their children in Toronto.  In the County, Otto forged a relationship with Oeno Gallery. There his work found an eager, local audience.