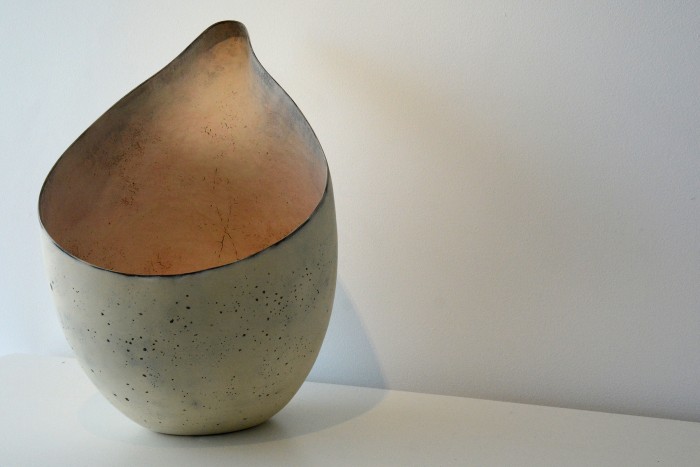 The Gardiner Museum in Toronto celebrates the 35 year career of ceramic artist Steven Heinemann in a comprehensive retrospective titled Culture and Nature. The exhibition continues until January 21, 2018.

The exhibition, comprising more than 70 objects, examines Heinemann’s process of making which can stretch over months or years. The artist will fire a piece multiple times reworking the surface, inscribing it, polishing and glazing.

“Ceramic has unique potentials unmatched by any other medium. It’s enormously responsive and records, eternally, even the slightest touch,” Heinemann was quoted in the Globe and Mail.

In Heinemann’s work the idea of the bowl – which he has created in a variety of shapes, sizes, colours and textures – speaks to shared human experience over time.

Since completing his MFA at Alfred University in 1983, Steven Heinemann (RCA) has taught widely in Canada and the United States. He has exhibited continuously since his first solo show at the Ontario Crafts Council in 1982, and his work is part of numerous public collections, including the Victoria and Albert Museum (London), Museum Of Fine Arts (Boston), Icheon World Ceramic Centre (Korea), National Museum of History (Taiwan), the Museum of Art and Design (New York), Museum Boymans van Beuningen (Rotterdam), and The Contemporary Museum (Honolulu).

Heinemann has received national and international awards including the Bavarian State Prize (Germany), the Juror's Award (Mino, Japan), Fletcher Challenge (New Zealand), and in 1996, he was granted the Saidye Bronfman Award, Canada’s highest recognition of achievement in contemporary craft.

We are honored to represent his work on exhibition at Oeno Gallery throughout the year.