André Fauteux is a Canadian artist who was born in Dunnville, Ontario, Canada on March 15, 1946, who now lives in Toronto, Ontario. Fauteux is a sculptor known for his abstract welded steel sculpture, which relates to geometric abstraction. His modernist sculptures are also associated with formalist ideas, associated with Clement Greenberg.

Fauteux moved to Ibiza, Spain in 1967, where he met other artists, including Coughty Graham and Gordon Rayner. While in Ibiza, he wrote and only began sculpture after his return moved to Toronto in 1969. His first work was made of wood.

Fauteux worked in the Toronto gallery owned by AV Isaacs in the late 1960’s. In 1970, he received his first Canada Council grant for the arts. Fauteux worked with Anthony Caro, at the University of York in 1974 and 1975. He showed in the gallery Sable Castelli in the city for over 25 years. In new York, he revealed Gallery William Edward associated.

In 1987, Fauteux, was chosen by Helen Frankenthaler as one of five artists selected to receive the Francis J. Greenburger Foundation awards presented at the Guggenheim Museum. Also in 1987, he participated triangle Barcelona, Casa de La Caridad, Barcelona, where he made a large round sculpture, which is now a Holocaust memorial in the Parc de La Ciutadella. Fauteux returned to Spain in 1990 to make the sculpture in the centre Dart La Rectoria, Sant Pere de Vilamajor, in Catalonia.

His art is currently represented in the Moore gallery in Toronto, which was shown in Fauteux’s bold colours and form of paintings.

The sculpture of Fauteux is spare in form, and non-referential. The sculptures include visual spaces, often with a rhythmic quality made of repeated elements and over-lapping areas. Examples of this are the group of galvanized sculptures of the pyramid in a triangle 1976 no. 1 and in details such as the Verve 1975, Moreau 1977, and Rosalino Roll, 1977. There are clearly connected elements in such works as Smith 1974, 1976 of the Empire, and the Fountain of Irony 1987. Recently, Fautaux is working with several layers of multi-colored and iridescent pigments, the top covered with galvanized steel and with some which are dipped in chrome and so very shiny. 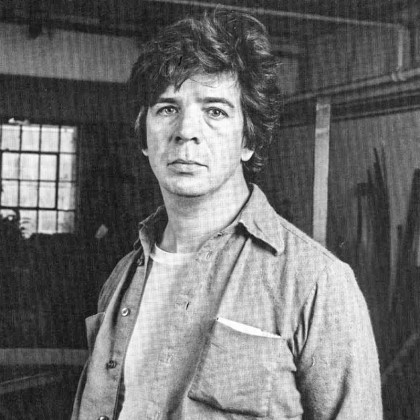