Born into a French Canadian family of farmers, Joe Fafard (1942-2019) completed a BFA in 1966 at the University of Manitoba in Winnipeg and a Masters of Arts degree from Pennsylvania State University. In 1968, Fafard taught sculpture and pottery at the University of Saskatchewan, Regina, but left in 1974 to become a full time sculptor.

Fafard came to national attention in the early 1980's after winning a now famous commission for seven bronze sculptures for the Toronto Dominion Bank in Toronto. In 1985 Fafard opened his own foundry, Julienne Atelier, Inc., Pense, Sask. Working primarily in bronze, Fafard cast farm animals and human subjects, each uniquely patinated. These artworks, small and large scale, are playful and poignant and focus on the personalities of animals and humans. Fafard exhibited internationally in countries including the US, the UK, France and Japan.

Fafard was named an Officer the Order of Canada in 1981 and received honorary doctorates from the University of Regina, the University of Manitoba in 2007 and the U. of Saskatchewan in 2012. The National Gallery of Canada with the Mackenzie Art Gallery in Regina mounted a retrospective exhibition of the artist’s work that toured to six venues between 2007 and 2009. Fafard's artworks are held in major museum collections including the National Gallery of Canada. 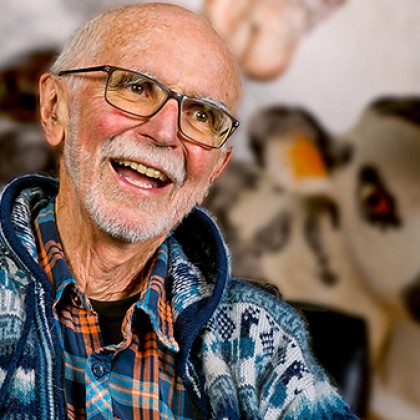