Lori Cozen-Geller is a Los Angeles-based artist. During her creative process, she looks to capture the emotions of the heart and mind and places them into visual form within space. "This process is a kinetic one for me. It is a journey that begins with a feeling, evolves into a powerful emotion and is then transformed into art. By freezing emotions and placing them into concrete form, I can then sit back and view the strength and meaning that now lies within the piece that has materialized as art. " - Cozen-Geller

"Lori Cozen-Geller formulates her sculptures out of a familiar, vital, and relatively recent artistic language. But in creating these objects, she has reasoned well outside the norms of this vocabulary and the genre it informs, almost to the point of heresy. Cozen-Geller is indeed a minimalist, following in the wake of hundreds of principally (if by no means exclusively) American artists who have pared down their formal vocabularies to essences. But Cozen-Geller wants something different out of large, simple shapes than do most of her minimalist predecessors and cohorts: she wants meaning. Symbolic meaning. Iconography, that is, as recognizable (if not necessarily self-evident) to the untrained viewer as a stop sign - albeit far less literal.
"There are several components that merge together to form my work. The dimensions of the piece along with the color and finish represent the power of the emotion that the piece was born out of. The decision to use sharp angles versus soft curves is determined by the nature of the emotions that are being represented. It is as if the emotions themselves dictate the specifications of how the art is developed.

By amplifying the decorous and the ordinary in her work - effectively pushing her works into the realm of the everyday - Cozen-Geller challenges herself, and us, to maintain the "special condition" of art. These objects finally present themselves as art because they manifest something transcendent. You can't sit on them or use them; you can only look at them. And you can't stop looking at them. They call attention to - well, not to themselves so much as to what they are saying. They attempt to reach across a verbal-visual divide to tell stories - or, rather, to elaborate on aspects of the human, and natural, condition. The works signal loss, alienation, socialization, isolation, displacement, discovery, self-awareness, self-denial, and other circumstantial phenomena - circumstantial not just to humans, but in some way or other to all sentient beings.

There is no guarantee that we will fully comprehend Cozen-Geller's "message." But her message is not her primary concern, and need not be ours. Cozen-Geller seeks to provoke not our recognition of her specific impetus, but our grasp of form itself in the emotional context she gives it. In this respect, she breaks with minimalism and harks back to an earlier attitude about abstraction: the belief, maintained by the very inventors of abstract art, that, rather than telling stories, providing decoration, or physically defining space and substance, abstraction invokes sensation. What we see, Lori Cozen-Geller believes, is what we feel."-Peter Frank, Art Critic

Cozen-Geller grew up in California. Her education includes a BA from the University of Southern California. She lives in Venice, California and works out of her Venice studio. Lori's first work took shape within hours of her father's passing in which the artist translated her feelings of love and loss onto a scrap of paper, the blueprint for her first piece of work. 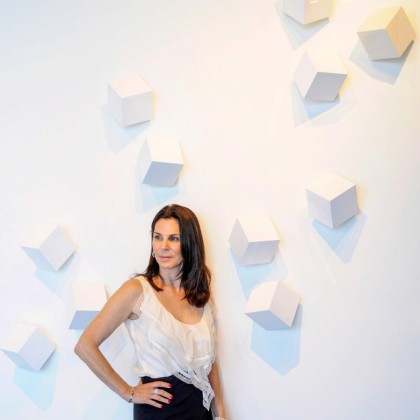