Renowned folk artist Maud Lewis (1903-1970) was known for her colourful paintings of life and the landscape of Digby, Nova Scotia.

Despite the hardships of poverty and advancing arthritis, Maud was able to create a body of charming and cheerful paintings that belied her situation – the fluffy white and black cats, the jaunty sleighs on wintry roads, the oxen festooned with bells and more. Maud painted on whatever surface was available including clam shells, dust pans and the walls of her tiny home.

Maud’s small house where she lived with her husband and worked since 1938 was restored and is on permanent exhibit at Art Gallery of Nova Scotia. Her artwork is held there and in the Canadian Museum of Civilization. She is the subject several biographies and two National Film Board of Canada documentaries. In 2017, a biopic of Maud's life titled "Maudie" was released starring Sally Hawkins and Ethan Hawke. 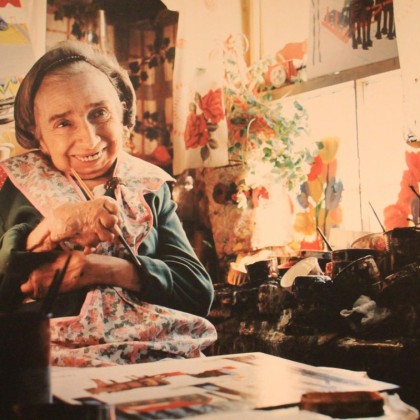