Canadian artist Pat Service has been creating expressive, intensely colourful acrylic paintings for several decades. Born in the small coastal town of Port Alberni on Vancouver Island, the beautiful, rugged shoreline, mountain vistas and ancient forests influenced both the subject and style of her work. She is known for her ability to capture the subtleties of light as they appear in the sky and water. Her brushstrokes also emulate the textures she observes in nature. Her use of thinned out paint allows for more transparency in colours and is a feature of her work. Service’s subjects are landscapes, florals, animals and still lifes.

“Living close to nature for the first 12 years of my life indelibly imprinted on me an identity with trees, fields, creeks, lakes, dirt, rocks, the sun, the sky, gardens, plants, flowers, roads, and so on. Every time I start a new painting I am attempting to honour and seal that connection.” - Pat Service

Service attended the University of British Columbia where she acquired her Bachelor of Arts degree. Her husband’s career took her to Scotland where she attended classes at the Glasgow School of Art. Her early influences were the Scottish artists whose brushwork and colour choices were reminiscent of the popular Post-Impressionist French painters. Service also lived in Eastern Canada and Venezuela but in 1972, the family moved back to Vancouver, B.C. She continued to paint and attended several artist’s workshops in the U.S. and Canada. Following numerous experiences at the renowned Emma Lake Professional Artist Workshops in Saskatchewan, (where she met a community of abstract painters including Milly Ristvedt), Service began to change her approach to her work. Traditional landscapes gave way to a more liberated, abstract style in colour and form.

“Working side by side with abstract artists, I began to envy their freedom to invent colour relationships and focus on mark making. The energy and excitement that comes with that kind of innovation, I wanted some of that. Up to then, I had worked closer to nature, not in a very detailed way but my work always had a clear reference to the real world.  Now I began to liberate myself from that close connection and trust the casual references that can evoke a world of its own.” - Pat Service

She has exhibited widely throughout Canada and internationally. Service’s paintings are in numerous private, corporate collections and several museum collections around the world. 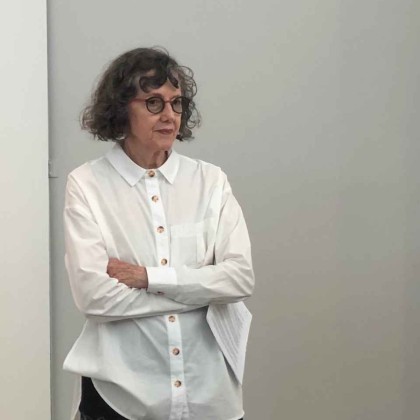